This is Carlotta, my sort-of friend for three hours climbing into the ancient hilltop village of O’Cebreiro. The landscape looks like this. To Carlotta it all looks like food.

It was three hours of pure bliss. Julia and I both hired horses from Victor, who guided us and the mounts up the mountain. I haven’t ridden a horse since childhood and it was great. We went through dark tunnels of forest, breaking out to amazing views on the switchbacks. Carlotta likes to eat. My only instructions with her were 1) don’t make any fast moves or she’ll throw you and 2) don’t let her eat. Both were easier said than done. She wanted to lean in to eat all the way along, and Victor would shout “Ayee, Carlotta!” I like to graze too, so I could sympathize. Eventually I got better at controlling her, but as Victor said, wisely, “Horses are big.” 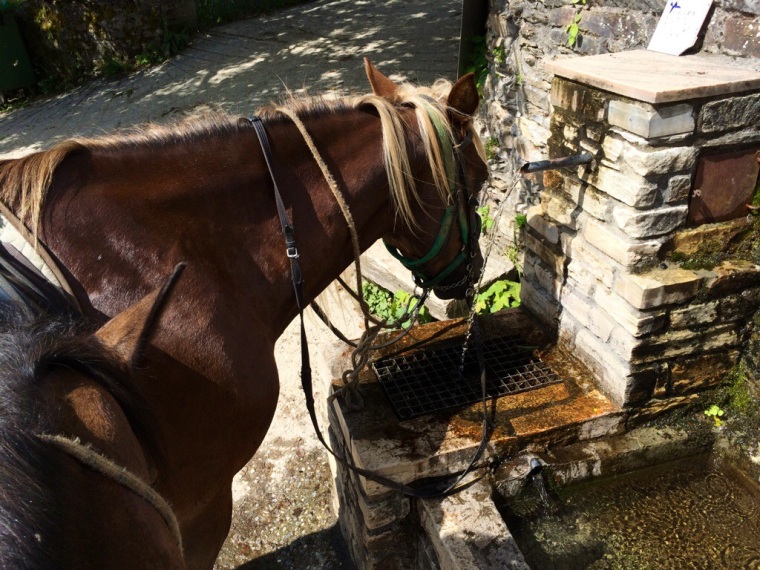 That’s Bonnie trying to drink water from a flowing pilgrim spigot, although there were plentiful horse troughs. I found myself going up a mountain on a horse by accident. I had walked a few miles out of town and someone called out to me, “Are you on the Pilgrim’s Forum?” It’s an online information site about the pilgrimage. We started talking at a bus stop. Julia is from Britain and Nadine is Australian. Turns out they had this plan to take horses up. I asked if they minded if I joined in… the rest is history. Horse’s shoes on stony paths really do sound like the coconut shells of Monty Python and the Holy Grail. And they have a 10th C. chalice in the church. Close enough.
I bought Victor and his daughter Carlotta a beer afterwards. He would like to develop a sort of Pony Express for the Camino, with horses, half day rides and food and lodging. I loved this ride so much. Victor told us that you can ride horses directly into one entrance of the Cathedral of Santiago. Can you imagine the steps of the horses echoing in Gothic arches? I would love to do this.

Dawn now, and veils of mist drift through. I have decided to stay one more day. This place has a sort of poignant, piercing beauty I have felt in only a few places: Big Sur, the Lofoten Islands in Norway, Karpathos in Greece, Hampi in India. I’ll catch up with my writing and sketching.

I keep losing photographs and writing because there’s no wifi here. I’m doing everything on a wavery data signal from my phone. Time to stop.
More later, I hope. Suzanne