The Art of Resistance, a popular and powerful collection of new art, has a closing reception First Friday, March 3, 2017, 5-8 PM.

Location: Backstreet Gallery down Art Alley, behind 312 South A Street, in the SOFA Arts District,  Santa Rosa.  Park on South A Street and follow the red signs.

The Art of Resistance offers completely new work created by professional artists since the last presidential election. Intelligent, passionate, and expert, it is not typical political art. Over 30 Sonoma County artists have created disturbing and beautiful works of art. Join us for this powerful show by your local arts community. Created and curated by Suzanne Edminster.  Read below for excerpts from articles by the Press Democrat and North Bay Bohemian. 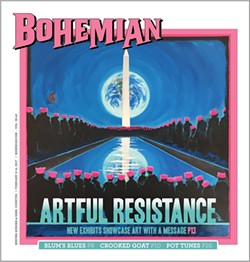 If there’s one upside to Donald Trump, it’s that he has spurred local artists to pick up their paintbrushes and pencils.

Edminster is an abstract acrylic painter and monotype printmaker whose Saltworkstudio is located in Backstreet Gallery in the SOFA arts district of Santa Rosa. She says Trump’s campaign of lies and capture of the White House has become a cultural climate change as deadly as rising sea levels.

Edminster and dozens of other artists in the North Bay rallied to produce new works of accessible, progressive and politically minded art. Edminster called upon more than 30 local artists to create new works on display at Backstreet Gallery’s “The Art of Resistance,” showing on Saturdays and by appointment through March 3.

“I thought we need some honest reactions,” she says. When she put the call out for political art, she wasn’t sure what would come in and she says the majority of pieces are not your typical political art.

That doesn’t mean the works in the exhibit are all flower-power images of peace and love. Some take a dark look into the hearts of those who refuse to help refugees, though many of the pieces try to find the light in the moment of darkness.

Edminster’s contribution to the show is Cash Cow, which tells the story of America’s corporate takeover through arresting visuals. A map of America is overlaid with splatters of color, and a striking image of a cow being led by a chain around its neck to depict the ways that America is being milked for all she’s worth.  Read more.

If the mission of artists is to reflect and respond to the world around them, then how can they ignore the dominant current event in American life — the unexpected rise and election of Donald J. Trump as president of the United States?

Trump’s election prompted artist and curator Suzanne Edminster to reach out to local artists for an exhibit she has titled “The Art of Resistance,” opening Feb. 3 at the Backstreet Gallery in Santa Rosa’s A Street arts district. The response was enthusiastic, with 30 local artists contributing artwork to the show. “So many artists are alarmed about a ‘cultural climate change’ that comes with the Trump administration,” Edminster said. “It’s not just that Trump is attacking the NEA (National Endowment for the Arts) and PBS (Public Broadcasting System). It is about the elevation of lies, screaming and crudity as a national norm.”

By contrast, the “Art of Resistance” show is at least as whimsical as it is strident. Graton artist Tony Spiers, who integrates pop culture icons into his work, drew a picture of Batman wearing one of the pink knit “pussycat” hats seen in the Women’s March.

Detail from a larger painting. Acrylic and gold metal leaf on canvas. Happy weekend! #Saltworkstudio #suzanneedminster #goldmetalleaf #contemporaryartcollection #contemporaryartexhibition #contemporaryartpainting #contemporaryartcurators #contemporaryartdaily
“ The flowers of Elysium“, Oil and acrylic on panel, 16“ x 16“. I am painting for the OverUnderworld series. All the paintings contain stories from mythology. I was interested to find out that in Elysium, also known as the fair Isles, where the heroes go after they die, He said to have gardens and flowers. I wondered what underworld flowers would look like…#suzanneedminster #saltworkstudio #artatthesource #abstractexpressionism #abstractpainting #underworld #overunderworld #sofassantarosa #elysium #persephone #hades
In the studio. It feels good. #saltworkstudio #SuzanneEdminster #atelier #atelierdecultura #artstudio #artatthesource #atelierart #sofasantarosa #outtheresantarosa
Painting detail from “Kerubim.” #Saltworkstudio #suzanneedminster #pinkpinkpink #artatthesource2021 #angels #fluorescentpink #sofassantarosa #southastreetartdistrict
Small metaphoracard collages. Like thoughts they multiply. 5“ x 8“ on mat board. They are a little different than most collage cards because I do an abstract painting on the background first, so any images have to interact with the painting. I think it’s always best to paint first before using others appropriated images. You have to get your own mark down, then maybe the guards will let you steal from the great weird Image library of the World. ... #saltworkstudio #metaphoracards #suzanneedminster #collagework #collagecollective #collagepainting #sofasantarosa #oracledeck #oraclereadersofinstagram #oraclecards
I’m thinking back to some of my trips during 2020. We called this one the dystopian summer vacation: wildfires in California, wildfires in Colorado, a heat wave over the whole Southwest, a pandemic, more California wildfires as we returned. This ancient art reminds us that every culture has gone through its problems. Still, some managed to make a mark that remains. The petroglyphs always inspire me. #Saltworkstudio #petroglyphs #utahroadtrip #heatwave #nativeamericanart #SuzanneEdminster #artbrut #primitiveartist #ritualart #bigmagic #creativityfound #kunstgallerie #traveljournalism