Writing you from Santo Domingo, where the magnficent Gothic cathedral keeps live chickens inside to commemorate a milagro, a miracle. I’ve been waiting all trip for this because I had a dream about it some months ago
The day started badly but ended well. Every night I take off my glasses and put them in a stuff sack in the bottom of my sleeping bag along with phone, passport and money. When I took them off this morning, an earpiece had broken off. In a foreign country, this can seem to be a really big problem, but I closed my eyes and thought “What would Scott do?” He’s the guy who can fix anything.
Here’s what I might do, before I became a wise Peregrino: panic, don’t change schedule, stick glasses with duct tape, have lousy, sticky and disfunctional glasses for the rest of the trip. Here’s what Scott would do: while away several hours until an optician opened and have them fixed. So I had a coffee, potato and egg tortilla, and an Aquarius (fizzy Gatorade type drink, supposedly with electrolytes). For two hours. And painted a few notebook pages. The nice thing about the illustrated journal is that it always gives you something to do. And I got them fixed.

By that time it was late in the morning, so I decided to take the bus to Santa Domingo. And I’m so glad I did. It turned into a completely relaxed, pleasant day. I had one of those extended lunches at a cafe facing the cathedral. I went to the small prayer meeting offered by the brothers who ran the albergue. I did laundry and visited the backyard chicken coop that supplies the cathedral chickens, who are not even on ground level but in a ridiculously backlight sort of alter a story high so you can’t even interact with them. Now that was disappointing, but I went back to talk to the patio chickens.
The albergue is lovely. The cathedral is grand and I think I saw Santa Domingo’s skull, but I’m not sure. He was a supercool saint. He came from a poor, lower class family and so the church nixed his becoming a priest. He said, fine, and proceeded to build a pilgrim bridge, a hospital, and improve the roads and highways… and founded a town and a cathedral. The church’s loss was the pilgrim’s gain. Domingo was a do-er and fixer, as is Scott, and like Scott, he can often be found with a few chickens at his feet. It was a day where a possible mishap was transformed into a fine, unexpected travel day.
True confession: I LOVE deciding things on the spur of the moment. What a luxury, what freedom. I’m grateful that everyone has been so kind– the optician fixed the glasses without charge because I’m a pilgrim. It’s the little things. Buen Camino, Suzanne 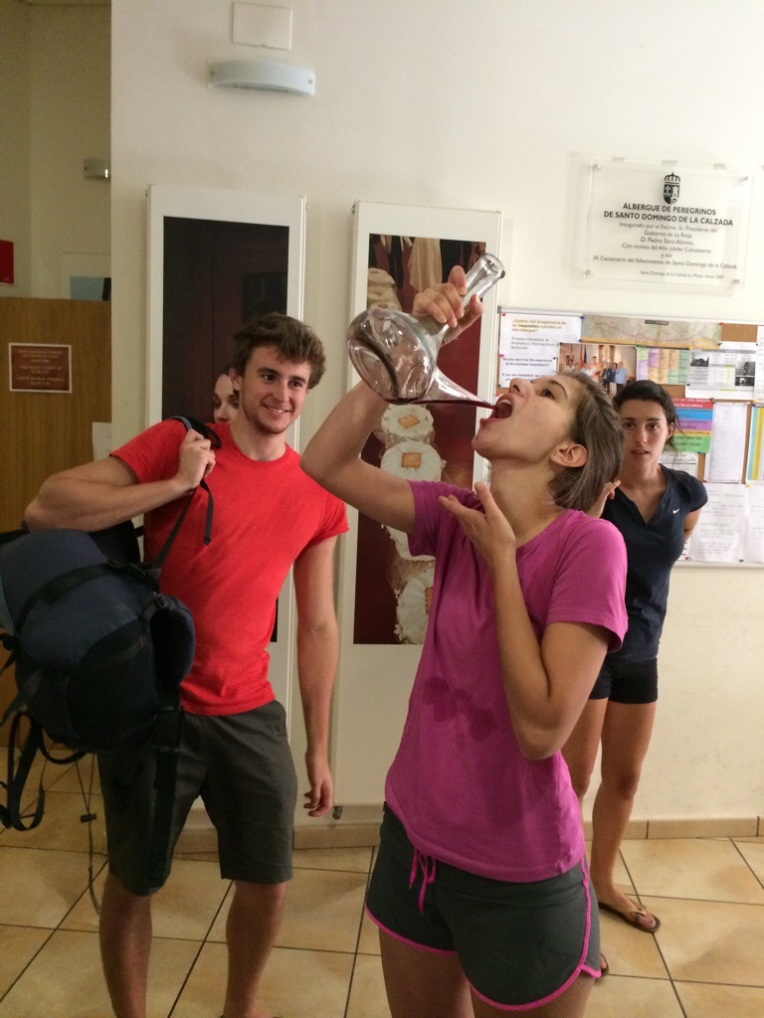