What do we want most when we are traveling through an Underworld?  One ill-fated goal is to rescue another who is stuck to bring them back from Death, never a good idea: the Monkey’s Paw effect.  Better is to journey toward a happy ending, reuniting with our loved ones or God. This was Dante’s goal. Another favorite hope, a subset of reuniting with loved ones, is to be in ecstasy all the time, eating and drinking and making love and giggling– to get high. The goals of the Underworld are actually in alignment with the goals of Comedy, not Tragedy:  it should end with a reunion or party with loved ones, and you should be able to get drunk, maybe listen to some really good music…

I made these drawings in the Getty Villa’s Underworld: Imagining the Afterlife exhibit. One thing that tickled me the most was Plato’s disdain for those who only wanted to go to the Underworld to drink wine.  There apparently was a cult devoted just to that.  As a citizen of perhaps one of the most hedonistic places on the planet, Sonoma County, California, where wine, weed, and fine food are elevated to a religion, I understand.

Plato loved wine, but was careful.  He even proposed the first age-related drinking laws: that boys should not drink before age 18, because it is wrong to add “fire to fire.” But he was careful not to elevate wine, preferring to use it as a tool for truth and celebration.  He said that to spend all our time in the afterlife “crowned and drunk” was dumb, that eternal inebriation was an unworthy goal for the Underworld.  Many of the Underworld themed wine vessels had phallic grape bunches, implying that there was even more bliss available Down There.

In this time of quarantine and apocalyptic thoughts, I can’t help but remember the rat banquet scene in the Werner Herzog film Nosferatu.  The people are feasting and dancing in the square in a sea of rats, because they know that they are about to die. In our world, this is a good metaphor for substance addiction; unable to stop as a world falls apart.  Dark.

Is it so wrong to imagine that some of life’s fundamental pleasures might be available after death?  I wish you surcease of sorrows, but in non-apocalyptic quantity that does not wreck your world.  Or your morning. It’s a slippery slope.

From Plato to you, as you sip your Quarantini  2,368 years later:  “What is better adapted than the festive use of wine in the first place to test and in the second place to train the character of a man, if care be taken in the use of it? What is there cheaper or more innocent?” 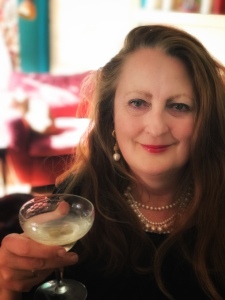 Here I am with my quarantini and pearls, sans rats.  Here’s to all of us. And from Plato: “Be kind, for everyone you meet is fighting a harder battle.” —Suzanne

This is the eighth Over Underworld release, a online art exhibit of paintings and sketches in March and April 2020. Featured art: Sketches from Dante’s Inferno Illustrated Notes. Contact saltworkstudio@gmail.com.

In our quarantine Underworld, we need a wildlife field guide. We are wandering through a dark, foggy place, the upside down world.  Or we are caught in stasis, like a formerly productive worker bee trapped in amber.  And then we come upon a monstrous beast…

The Bitch, above, is part of a series of Underworld animals.  I start with random marks, and the paint-beasts emerge from the darkness, almost like a negative developing in a bath in the old world of photography.  Since I believe Hell to be states of emotion and being, the Beasts are instincts turned to shadow and  gone bad.  All underworld animals are generally about the mouth or maw, devouring or spitting fire or venomous. All tend to have big red or floating eyes.  And many cultures have Underworld dog creatures, like my Bitch, like Dante’s wolf.

I’ll let you wander in the Underworld with my Beasts for a moment.  The worst Beasts threaten to devour us during this Quaran-time: boredom, apathy, bitchiness, physical illness or disfunction, anxiety, cruelty to others with whom we are trapped, anger, denial, fear.  What freezes you when it happens?  What drives you to the couch, the bottle, your OCD activity,  the Netflix binge? That’s your Beast. 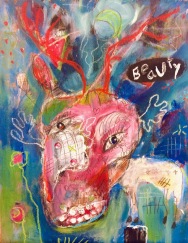 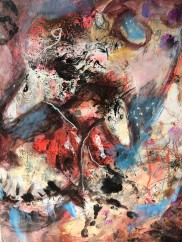 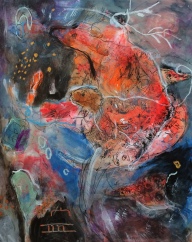 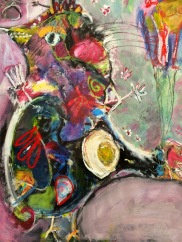 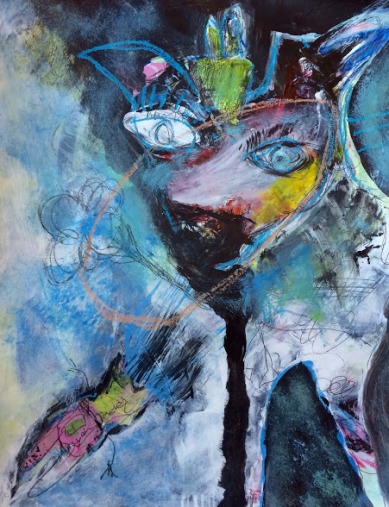 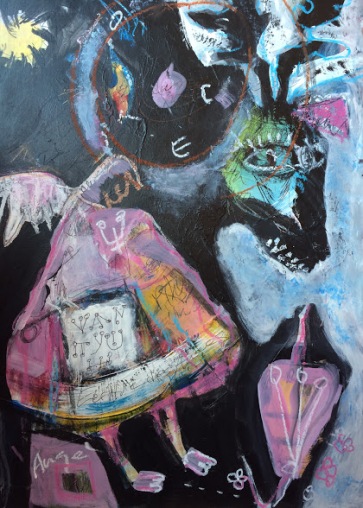 All Underworld beasts cannot be ignored.  You have to greet them, while avoiding being eaten.  You have to placate them so you can get by them and on to the next stage of the journey.  I have found three major modes of placating and soothing them, at least according to mythology.

I was happy to learn that there is a tradition in China of underworld Horses and Oxen. Perhaps Cash Cow, below, belongs to this tradition.  This was painted in 2017, shortly after the Trump inaugeration.  The cow is America, bought for cash and kept chained and overused for milk until it dies. Perhaps the little flying mosquito-like stars are the attack of the coronavirus.

Dear Readers, I have new work, but have not been able to get to my studio to properly photograph it, due to movement restrictions.  I will try to do this next week so we can see what grows out of the Underworld– The Tree of Life– in the next Over Underworld Art Exhibit releases.

In the meantime, placate those Beasts.  All be well, Suzanne

This is the seventh Over Underworld release, a online art exhibit of paintings and sketches in March 2020. Featured art: Bitch,  Rocket Bunny, Underworld Herd and Night Hunt, all original acrylics on panels,  all $450.   Cash Cow, acrylic on canvas, $750. Available.  Contact saltworkstudio@gmail.com.