The Trojan Horse was surprising to both of us.  Just how did this image develop, seemingly independently of plan or will?  What was happening behind the Oz-like curtain of the studio process?  Follow us through our start and stages.

The Start: We poured ink, gesso and paint. What a figure emerged! I named him The Prophet in my mind. It was off-balance composition, with emphatic marks and lines hovering like bats, and Halloween colors. Edgar Allen Poe might have been proud.  We had agreed that we would work with large curves,  a vertical or upright form somewhere, and calligraphic marker lines on this series, and all those forms were there– but– like a “bad” child, acting out.   It wasn’t pleasing from the very start the way some of the abstract pours were; it was not initially not beautiful. However, it did invite radical action, which was fun.

Each Four Hands painting seemed to have its own soul or being trying to emerge.  When two people work together, control is lessened and gaps are created where fate or luck can enter.

Each “problem” became an invitation in the next stages.  Too warm?  Add purple shapes.  Periwinkle violet rectangles began to pop up.  An “arm” of the form was eliminated.   More gesso was combed on with one of Susan’s notched forms and a “coliseum” emerged.  Horse + ruins =… oh dear, a Trojan Horse was emerging, that gift that kept on giving.  The foreground aquired areas of blue and white as well.  Torch forms, cakes, candles started to light things up with red.  The canvas was very messy at this stage, with many distracting marks.  Time to remove and transform.  Heave-ho!

Susan had been exploring horses in her work, and I had just returned from Italy, where I bathed in Greco-Roman art and lost civilizations, so I supposed both of these elements emerged.  Like a dream, though, it was more than that.  The painting seemed related to Timeline in style and form, and was grouped with it in the show.  Trojan Horse and Timeline share some aethetic of “event” or chronology, time on wires.  You can see them together in the show.

More blue added, orange cut back, violet reduced, pure red accents.  Opaques calm . A few greenish and brownish neutrals to rest the eye, and an iconic horse moves, as Joni Mitchell put it, on the “carousel of time.”  Or a child’s hobby horse thumps through a field….What do you see? For another Four Hands painting, visit Susan Cornelis’ Conversations with the Muse.

I’ve posted a picture of the Four Hands Collaboration below and an invitation to the event at Phantom IV Gallery this Saturday afternoon and evening. Come celebrate with us if you can. 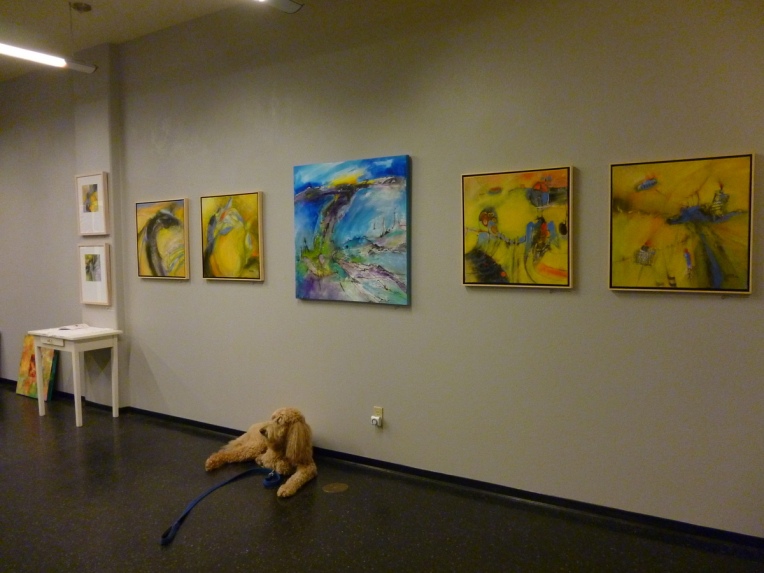 Susan Cornelis and I have been passing paintings back and forth in our collaboration, getting our mirror neurons working. “Mirror neurons” are really highly speculative, as far as hard science goes, but are a seductive concept. We are made to imitate and to share knowledge, to mimic. Our brains recreate what we see as our own experience. When we see someone pick up a lemon, our taste buds start. In our case, we have at times in the collaboration consciously tried to mimic the other: to use a Suzanne color or make a Susan shape. Some of these paintings are turning out to be the “best” ones.

It makes me wonder if paintings– and all art– actually encode the experience of the painter, or, in our case, painters plural, into the paint itself. When we look at the Mona Lisa, do we start to resonate with da Vinci’s beautiful brain? He wrote all his notes in mirror writing, so maybe he cracked the code centuries ago, as he did with flying machines and submarines. Why are some of the collaborative paintings powerful? Here’s a question for the ego to gnaw on, and one we’ve discussed. Are the collaborative paintings “better” than our individual ones?

You can come to our show and find out. The painting shown here, “Four Elements”, is a good mirror painting example: Suzanne paints with Susan’s cool palette, Susan tries Suzanne’s odd forms.  Let us know what  you see in this work.